Elegance In Damask Holiday Card
Christmas cards and holiday thank you cards by Shutterfly.
View the entire collection of cards.

We officially have a part timer!!!! Nolan will only wear the helmet when he is sleeping or in the carseat. He will be part time for three weeks before graduating unless he grows out of the helmet sooner which may just happen! Im excited and nervous. I am just extra paranoid about when he does not wear it so I am constantly making sure he is sitting up and not laying down while he is playing. He has been a really good sitter for the last 2 weeks. Therapy is improving and we have the tape on for one more week even though he doesnt really need it I requested it from our therapist.

I am looking forward to meeting some other Plagio mommy's tomorrow night at an event where we take Nolan. I think he will wear his helmet because on the ride over he needs to wear it so we may just leave it on for the event. Nolan is very squirmy now a days and very loud. He gets so excited and starts waving his arms and yelling mama lol. He just needs to say dada so his daddy can get off my case about me being his favorite :) Which is fine with me since he is with me all day. Anyways i have to get ready we have a therapy session this morning.
Posted by Stacy at 8:47 AM No comments:

There is no excuse of course. This last week has just flown by.

The first piece of great news is that Nolan has mastered propped sitting. He does lean a bit but our PT said that he could have come out of the helmet last week. This is amazing news!!!! We are going to call his orthotist tomorrow because she wanted him to transition out of the helmet. So he would go to part time before it comes all the way off. I believe part time wear is only during naps and sleep overnight. This may be a huge week for all of us. I love to see his smiley face outside of the helmet. He looks so much like my husband when he isnt wearing it :) Either way I think hes adorable anyways.

On another general note he now has added green beans and carrots to his favorite list of bananas and peaches. He makes the sweetest noises and just screams Mama everywhere we go, he gets so excited he starts moving his legs and arms so fast and sticks his tongue out at his if were playing with him.

His favorite toys are still Sophie, his seahorse of all things still, his jumperoo, and the bumble bee he uses in therapy. Of course anything he can shove in his mouth is always good. He has no teeth but i can see some white in his gums in three spots so I dont know if they will all spring up at once or what. Also, fall has arrived here in MN. He has been wearing long sleeve sleepers for the last 2.5 weeks. Althought today was unusually warm. With his helmet he is so hot but when those fall temps are here he is cool enough.

The kineso tape seems to be going well. He just had it put on Wednesday, Its starting to unravel which she said it would but i notice him sitting up quite a bit straighter now. I really hope it helps. Also we have him kneeling beside a cushion and he keeps standing on his legs and laying his head down, it is just so weird to see him standing even if its only half standing! Hes growing way too fast :(
Posted by Stacy at 9:28 PM No comments:

Well my in laws left today and although there were more headaches then anything we all cried a bunch. It is so hard to be so far away from family and friends when going through something stressful like this. However, i count my blessings every day that my son does not have something worse then this.

My mother in law pointed out to me a few times that for as many things that have gone wrong, Nolan has handled everything very very well. He is the best baby when it comes to being strong and just handling every situation. He did not cry when or fight anyone when he had to have drops at the eye doctor, during his shots he just cries for a split second and then its over. I keep telling his doctors who are always shocked at how well he does that he has gone through so much that these other things are nothing compared to what he goes through daily with the helmet.

The helmet is officially trimmed as much as possible in the front where he has skin breakdown, which is basically where the helmet rubs and it leaves a red mark. They dont want it to get worse so then it does not leave any permanant marks or rashes. She said his head is still perfect. The therapist said his propped sitting is definately mastered and now we are on to trying something new.


We are going to use Kineso Tape on his obliques. She said it will speed up the process and make him learn to use his tummy muscles to pull himself up and catch himself. Since we are in a hurry due to the helmet not fitting properly, we need to speed up the process. Kineso tape is used by the olympians and looks similar to bandaid material with grooves in it. they will make an X across his belly and he will wear it until it falls off which is about a week and then get new as long as hes learning and it works. I just pray it works because the helmet will probably come off in about 2 weeks. Being that his measurement is now only 2.5 mm he has made drastic improvements with his head now we just need his neck to catch up to his head. I will most likely be away from the computer for this weekend but promise to return to normal on Monday. So in light of that Happy 7 month birthday tomorrow to my handsome son. I love you more then anything and no matter what we could not be prouder of your accomplishments everyday!!! 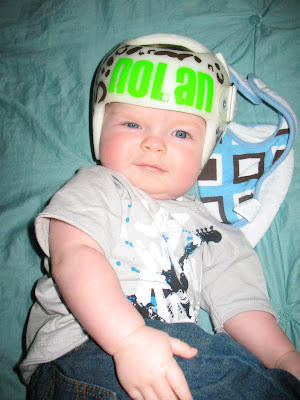 I have been a terrible blogger. I forgot to update everyone and let you all know that my in laws are in town for two weeks. I currently have 4 extra people in my house and its been nuts.

Anyways, i will be a better blogger once the weekend comes and everyone leaves.

Nolan is only 2.5 mm now!!!!! We need to celebrate. He is chatting up a storm with mama and baba. He sits but will start to lean after a while. Therapy is going okay he still needs it every day and 2 times a week at the hospital. I just pray and hope it works for his neck. I wish i seen fast improvements with his neck but I will take what i can get right. I will be back to regular "programming" on the weekend lol.
Posted by Stacy at 2:52 PM No comments:

I am now that mom

Today after PT, I had to run some errands. We were in target and i swear i spotted a pink helmet from a mile away. So i ran up to the mom and said i love your daughters helmet and then she said i love nolan's helmet too (his name is right on it obviously). It had pretty flowers all over it. She looked about  a month younger then nolan. She said you never see them and i told her she would soon.

I couldnt believe that I was that mom, i was the one approaching someone else. This seems like a giant step for me. I remember sitting in the kitchen on the floor just balling when it was so brand new. Im a mom but I am also part of a different community now too. Im a plagio mommy and thats fine and Im proud to be educated about it now. Sorry for my absence again. I am no longer interning due to a few reasons which are personal but for this semester I am off.

Nolan is working very hard in PT and propping himself up and bearing weight on his arms which is a great step towards sitting up alone. We can let go for a little bit but he still needs us. His current fave new food is bananas. He absolutely does not like sweet potatoes and applesauce, is take it or leave it. The pt also suggested certain types of toys that assist with his torticollis. They are so hard to find because most of them came out about 5 or 6 years ago so they are not made any longer. Ebay here i come i guess!
Posted by Stacy at 1:25 PM No comments:

We officially have a tummy sleeper. He has been rolling onto his stomach at night which is fine now, the doctor said its appropriate to let him do so. Well now we lay him on his back to start and about 10-15 minutes later hes all twisted up from trying to get on his belly without squashing his arms. So we pull his arms out and let him lay. Now me being a paranoid mama i worry about him being on his belly but i have to realize that everyone said it was fine if he ended up on his belly so i need to relax.

Also he has been smashing his right eye so the fluid in his eye goes up into his lid and it looks swollen. The doctor checked it and he said its fine as long as there is no redness or goop. Gross i know. I just wish it wouldnt do that but he sleeps best on his belly like his mama. Well im exhausted and have a house to clean and PT to get up for in the morning.
Posted by Stacy at 9:28 PM No comments:

Stacy
Im 27 years old and i was married in May 2007 to my wonderful hubby Nick! I have an AA in Social Work and Im working on my BA in social work. We had our son in February 2010 and we love him more then anything.